Speedscene is a highly regarded magazine published by the HSA five times a year and is the only full size UK publication dedicated to the sports of speed hillclimbing and sprinting. Speedscene is free to HSA members and and available on subscription. It contains reports, articles, photographs and features covering all aspects of the sport. The high standard of production of the magazine and its A4 full colour format sets it apart from the normal club publication.

A typical edition of Speedscene includes:

With the season in full swing there are full BHC reports from Harewood, Gurston, Shelsley and Doune, BSC reports from Blyton and Pembrey along with a round up of more than a dozen Sprint Leaders and HSA Speed events. Special reports are included of the Prescott Historique and the Kenny Allen memorial hillclimb at Doune.

Steve Wilkinson continues his series of now discontinued venues with his memories of Finlake and there is a photo feature of the Norman Foster automobile exhibition at the Guggenheim. Graham Blackwell reveals the latest developments, turning his Formula Ford Mygale Ecoboost into a British Sprint front runner and Steve Chaloner continues on his journey to eventually compete at St Ursanne. 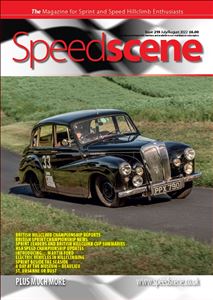