Event 17 at Curborough on 13/10/2019
The HSA held their final meeting of the season over Curborough's Figure-8 course where, in charge of his class throughout the weekend, Justin Andrews became the first winner of the revitalised Sprint Leaders championship. The Subaru Impreza driver's winning margin over the absent Matt Hillam was a clear 33 points. However Hillam remained safe in second place despite a stiff tussle in his wake. For the second day running, John Loudon was in amongst a competitive bunch of 1100cc Racing class contenders led once again by Alex Summers, whose FTD today was just 1/00th shy of his own outright Figure-8 course record. Following a first run spin, sixth in class was all Loudon could muster.
This would prove costly as Pete Goulding, who had already displaced the absent Steve Broughton on the overall table the previous day, now had his sights set on the Force HC driver. With another class win, against stronger opposition than on the previous day, he took third FTD behind Summers and David Tatham in their 1100cc cars, and edged out Loudon by four points on the championship table to take third overall in the final standings.
Out on his own and rounding off the top six overall was Dave West, an eventual third in class and joined in the Peugeot 106 today by his son Nick, whose all-out attempt to get on terms with his dad's fourth place in the 2-litre Roadgoing Production class resulted in the most spectacular pirouette of the day - twice, at high speed! 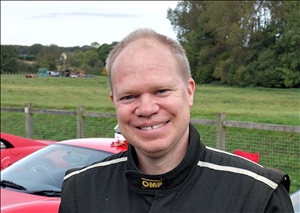 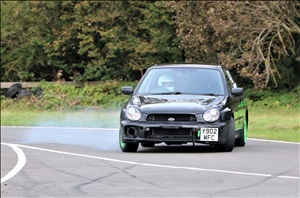 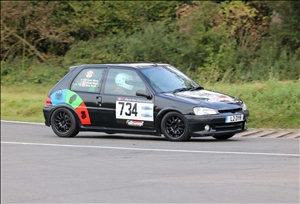 ANDREWS ON COURSE AT CURBOROUGH


Event 16 at Curborough on 12/10/2019
2019 Sprint Leaders championship leader Justin Andrews arrived at Curborough for the first leg of the HSA's annual end-of-season double-header, run on the 2-lap course, looking to maintain or extend his lead with his Subaru Impreza. He was still adjusting to this car, which is a little different to the one he used to win the 2017 HSA Speed Championship, and a big spin at the first corner in practice meant that he had to concentrate for the timed runs. This he did, moving well ahead of the over 2-litre Roadgoing class competition on each run to score well. With Matt Hillam, second in the Championship, not competing at Curborough it was John Loudon, third on the table and seven points behind Hillam coming to Curborough, that was trying to  overhaul the SBD/Dallara driver's score. Unfortunately the Force-Suzuki HC driver was running in one of the most competitive classes of the weekend, the 1100cc Racing class, in which the top three drivers were the quickest overall on the day while the winner, this year's British Hillclimb runner-up Alex Summers, twice broke the outright Curborough 2-lap course record on his way to a convincing FTD. Amid such stiff opposition Loudon was unable to improve his overall placing and would come under fire from Pete Goulding, who lay a couple of places adrift coming to Curborough.
Fourth on the championship table, Steve Broughton was also absent and the margin between the Dallara driver and Goulding on the series table was just three points. A broken driveshaft coming to the line for his first run proved only a temporary set-back for the Mygale-Ecoboost driver and his second run, which netted a class win by 2.5secs over first run spinner Paul Tinsley's Dallara-Vauxhall, was more than enough to make up the deficit. Some way behind on the championship table, Dave West's third in class in the Peugeot 106, although just half a second behind the winning Mazda MX5 of Dean Cubitt, kept him in sixth place. 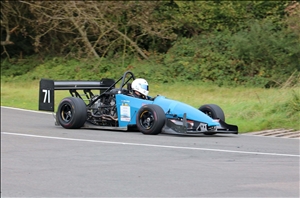 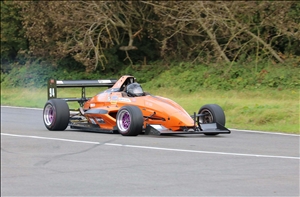 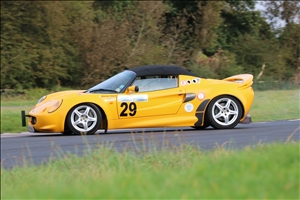 Andrews stays ahead of Hillam at MIRA


Event 15 at MIRA on 14/09/2019
As the newly re-instated for 2019 Sprint Leaders championship draws to a close all of the leading protagonists assembled at MIRA for MAC's Autumn Sprint.

Having moved to the head of the leaderboard at Blyton the week before Justin Andrews (Impreza) needed a good result to stay ahead of Matt Hillam (SBD Dallara), particularly as Matt took a brace of maximum scores and FTD with a 39.91s run and the only competitor on the day to go sub 40s. However, Justin was equal to the task and matched Matt with a pair of class wins to maintain his lead in the Championship.

Dave West also scored well in the Peugeot 106GTi to climb the leaderboard. Pete Goulding took a couple of 10 pointers in the Mygale M13 to keep his Championship hopes alive.

Note: All photos are by Kim Broughton and have been approved for publication by the venue 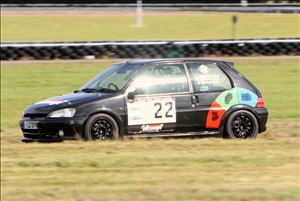 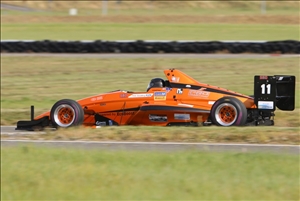 Pete Goulding moved up to sixth in the Championship 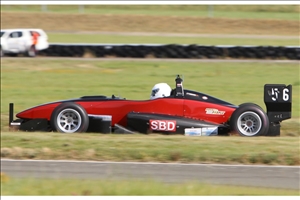 FTD went to Matt Hillam in the Dallara


Event 14 at Blyton Park on 08/09/2019
On Day 2 of the NSCC Blyton Sprint week-end, held on the Outer circuit, two class wins were enough to propel Justin Andrews (Impreza) to the top of the 2019 Sprint Leaders championship standings.

Of the other Leaders competitors present Alan Mugglestone was unable to repeat the performace of the previous day while Carole Torkington didn't manage to set a T2 time.

FTD went to Jeff Wiltshire in his Zeus Challenger on 59.85s 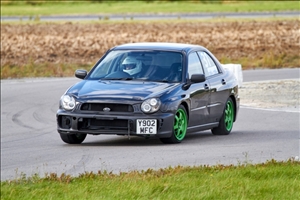 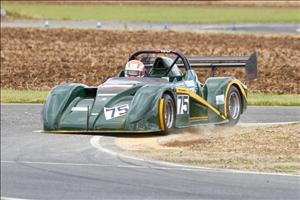 
Event 13 at Blyton Park on 07/09/2019
The 2019 Sprint Leaders skipped a couple of rounds as no competitors were at the two summer Three Sisters events. But at the NSCC Blyton Double header Justin Andrews (Impreza), Alan Mugglestone (RAW Fulcrum) and Carole Torkington (SBD OMS CF08) all took the opportunity to collect more point in this very open competition.

The Saturday event was held on the Eastern circuit and set to make the biggest gains were Justin Andrews and Alan Mugglestone who scored well in the first, T1, round to edge closer to the leaders. However, they were unable to set a time in the second, T2, round so were left disappointed. Carole Torkington, however, scroed well on both runs.

FTD went, for the umpteenth time, to Glyn Sketchley in his turbocharged Busa Force PT on 64.59s 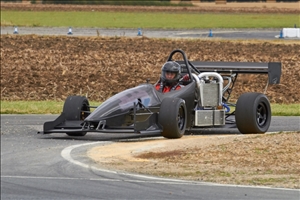 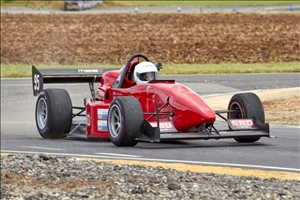 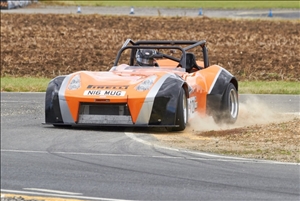 Andrews the 'winner' at Lydden


Event 10 at Lydden Hill on 13/07/2019
Justin Andrews (Subaru Impreza) was the 'winner' at the Lydden round of the 2019 Sprint Leaders championship with a pair of maximum scores and also won Class A3 on the day.

With all the single seater competitors running in a single class it was those with the faster cars that scored well including Matt Hilam and Steve Broughton (SBD Dallara) and Graham Blackwell (Mygale M13). 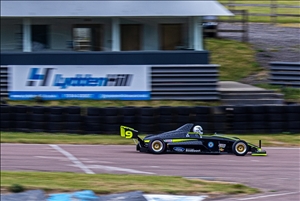 Graham Blackwell on the start straight at Lydden (Mike Curtin)


Event 9 at Aintree on 29/06/2019
John Loudon (Force HC) extended his lead in the 2019 Sprint Leaders Championship at Aintree on June 29th with a maximum points score by winning the 1100cc Racing Car class on both timed runs.

Despite not scoring as well as they had hoped both Matt Hillam (SBD Dallara) and Pete Goulding (Mygale M13) retained their second and third places in the Championship. 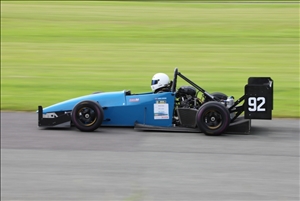 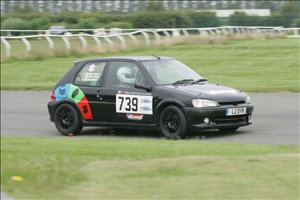 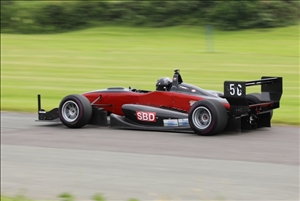 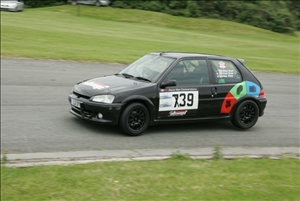 
Event 8 at Pembrey on 02/06/2019
With another maximum points score from the two rounds held at Pembrey on June 2nd, John Loudon (Force HC) moved to the top of the Sprint Leaders points table. The wet (T1) and drying (T2) conditions provided a challenge for all competitors. 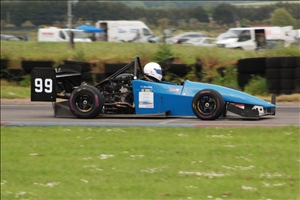 A good day for Brown & Loudon at Pembrey


Event 7 at Pembrey on 01/06/2019
At a dry and sunny Pembrey on June 1st both Steve Brown (JKS) and John Loudon (Force HC) took maximum points from the two rounds. Simon Bainbridge (SBR Chrono) and Steve Broughton & Matt Hillam (SBD Dallara) were close behind to move them up the overall championship table. 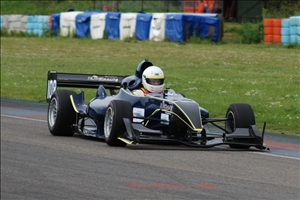 Andrews closes in at Blyton


Event 6 at Blyton Park on 19/05/2019
Two maximum points scores moved Justin Andrews to within three points of Championship leader, Pete Goulding at Blyton on May 19.

Following problems with his MX5 Anthony Brown hitched a ride in a Westfield while Alistair Clarke was up against some very quick Elises and Exiges which kept his scores depressed (but not the driver!). 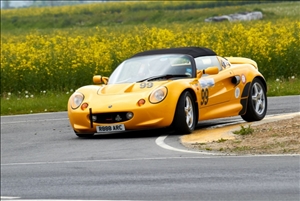 Alistair Clark was up against strong opposition (A Mitchell) 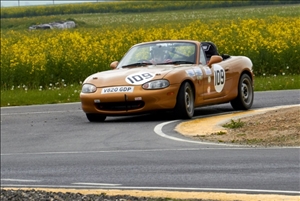 Anthony Brown in the MX5 before problems intervened (A Mitchell)

Andrews & Loudon in the points at Blyton


Event 5 at Blyton Park on 18/05/2019
Justin Andrews in his newly rebuilt Impreza and John Loudon in his recently acquired Force PT scored well in the two Sprint leaders rounds at Blyton on May 18th.

They kept up the pressure on series leader, Pete Goulding in his Mygale who also picked up a haul of points. 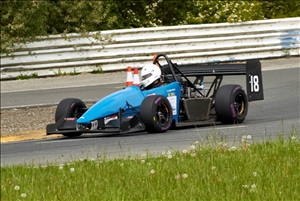 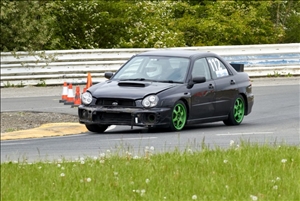 Justin Andrews in the Impreza (A Mitchell)

Goulding and Andrews at Goodwood


Event 3 at Goodwood on 20/04/2019
Just Pete Goulding (Mygale) and Justin Andrews (Impreza) represented the Sprint Leaders championship at Goodwood and both netted a pair of good scores to put them first and second in the standings. 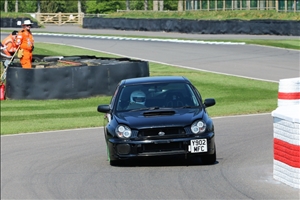 Fast and Furious on the Anglesey International Circuit


Day two at Anglesey saw all the same SLC competitors from the previous day tackling rounds 3 and 4, but this time on the longer and faster International circuit. Given that it was early April, conditions were very good, with a dry track, sunshine all day, and only a light breeze.  Again, only one practice run was offered, and then the first two timed runs counted for rounds three and four.

Again 8 single seater racing cars took part, split evenly in pairs across 4 event classes. Peter Goulding was first and Graham Blackwell second in both rounds in the up to 1600cc forced induction class.  In the 1600 to 2000cc class, Matt Hillam won round 3 while Steve Broughton was fourth. However, their positions were reversed in round 4 with Steve coming second ahead of Matt in third. Steve Brown and Carole Torkington again scored first and second places in both rounds in the 1100 to 1600cc class, while John Loudon and Mark Anson repeated their respective first and second places in the up to 1100cc class.

Alistair Clark was again the only SLC runner in his Elise/Exige subclass, ending up with two fifth places. Justin Andrews (Subaru Impreza)  scored two second places in the over 2000cc division. Nick West had a first place in round 3 in the Peugeot 106 GTI , ahead of father Dave West who was second. However, family honour was restored in round 4 when Dave took the class win but Nick slipped to third. Finally Anthony Brown (MX5) placed fifth slot in both rounds in the class for two and four seater sports cars up to 2000cc. 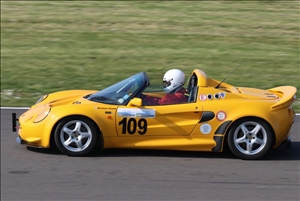 Alistair Clarke presses on in the Elise (K Broughton) 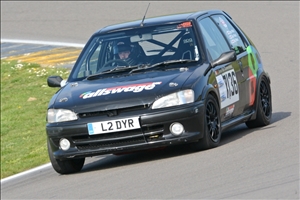 A Good Start to the Revived Sprint Leaders Championship


Almost all of the competitors who had registered for the Sprint Leaders Championship took part in the first two rounds on the  Anglesey National circuit. Conditions were good, with a dry track and some sunny intervals, but there was a cold wind blowing throughout the day. The event format was somewhat controversial in that only one practice run was offered, and then the first two timed runs counted for rounds one and two.  Subsequent runs mattered not for championship points.

Alistair Clark was the only SLC runner in his Elise/Exige subclass, ending up with two fourth places. Justin Andrews was running his newly reshelled Impreza – now with all the best running gear from his earlier car installed following his Gurston Down mishap last season. He scored a third and a first place in the over 2000cc division. Nick West scored two first places in the family Peugeot 106 GTI in the well supported 1400 to 2000cc class, while Dave West came third in both rounds. Finally Anthony Brown (MX5) took a third and a fifth slot in the class for two and four seater sports cars up to 2000cc. 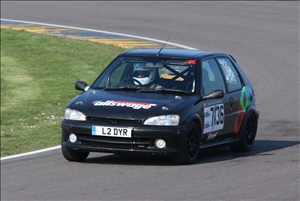 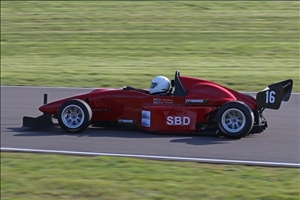